With the release of iTunes 11 Apple modified a lot the popular music manager, bloating the interface and removing popular features such as opening playlists in multiple windows. Many users chose to stay behind, but if you install the latest versions of MacOS (neé OS X) you will get the newer version even if you dont want it.

As a musician, I use iTunes a lot and rely on some of the capabilities of iTunes 10. Stil, I recently decided to update to Sierra and wanted to retain such capabilities and also to be able to share the iTunes library with my Snow Leopard installation, which isnt going to go away anytime soon.

As I quickly found out, iTunes 10 is actually quite happy to run under Sierra, but it opens with an error -42401 and refuses to cooperate with iDevices and to work correctly on the store.

In this article were going to patch iTunes 10 to fix the -42401 iTunes error while maintaining the full capabilities of the Mac App store.

At several points during this guide the system will ask for your administration password. This happens when it needs to modify files your user doesnt have permissions to change and its quite normal.

1) Recover iTunes 10.7 from Apple or from your old installation.

2) Using Pacifist extract the "iTunes.app" bundle from iTunesX" dragging it on your desktop, then rename it tu iTunes10 (note: there is a .app hidden extension) and move it to your Applications folder.

3) Ctrl-click on the iTunes10 app to bring up the contextual menu and navigate into the Contents folder inside the bundle. 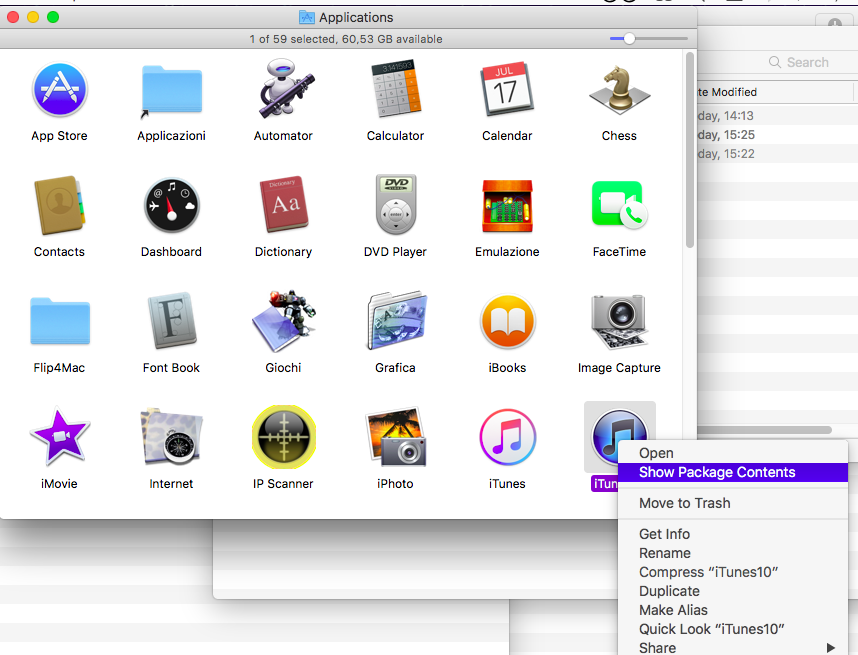 4) Back to Pacifist, drag the "/System/Library/PrivateFramework/CoreFP.framework" framework into the Contents folder inside the "iTunes10.app" bundle. 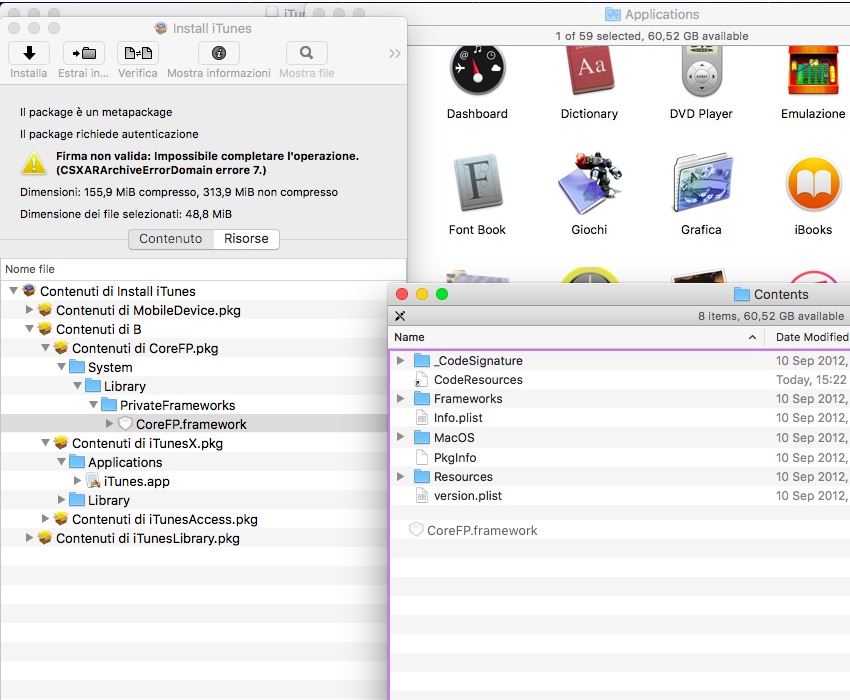 5) Rename CoreFP.framework to CoFP.framework. This is necessary as were now going to patch the iTunes executable with an hex editor and need to maintain the same length of the string were going to change. 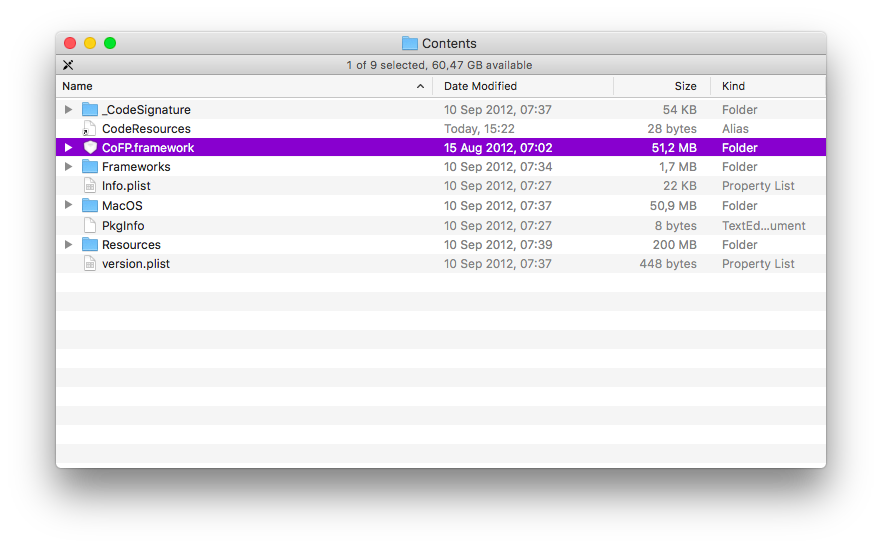 6) Change the file permissions of iTunes10s "MacOS" folder using Terminal (/Applications/Utilities/Terminal). The command to give is

Youll be asked for your administrator password, its normal for the cursor not to move. 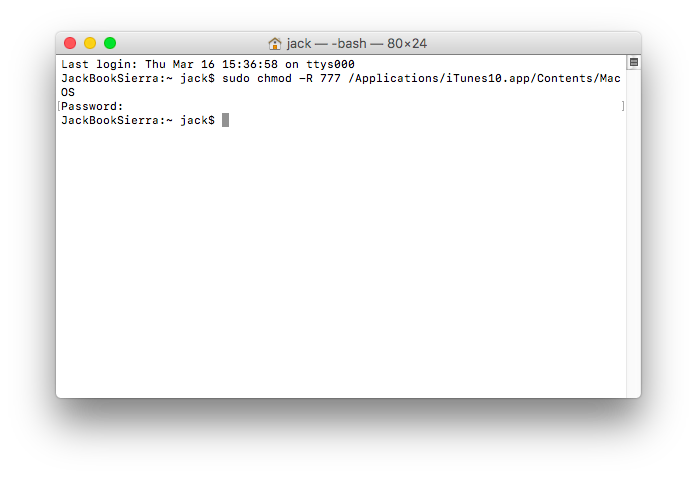 7) Open the iTunes executable inside the MacOS folder with an hex editor (I use HexEdit http://hexedit.sf.net) and use the Find & Replace feature to replace

There should be a couple of occurrences of the string.
Save and quit. 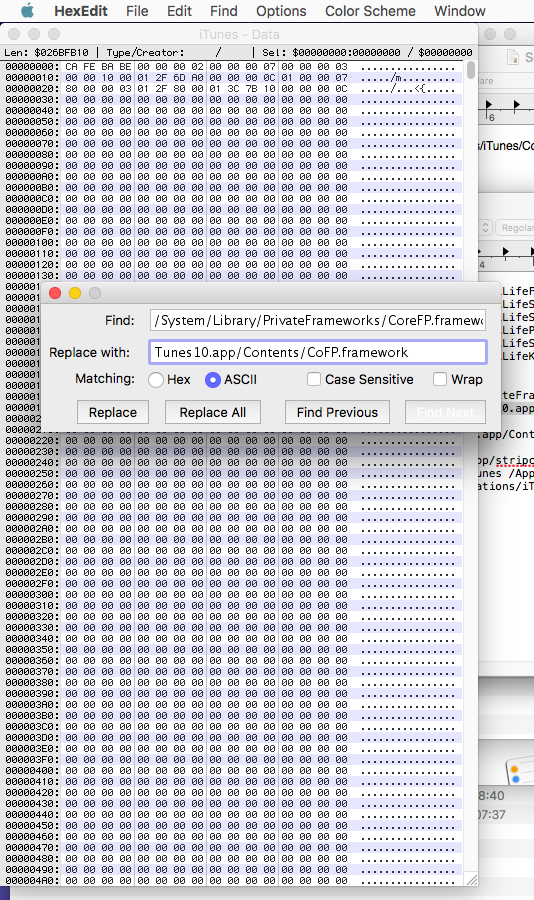 The applications is now patched but it wont run yet, as the executable has been modified and wont match the code signature of the bundle. Were now going to remove the signature.

7) Download stripcodesig and move the folder on your desktop. It's possible the system wont let you run the executable it at first instance, saying it comes from an unidentified developer, control-click on it and select open and youll be given an option to run it anyway. Do so.

8) Open a Terminal window and give this command to strip the signature: 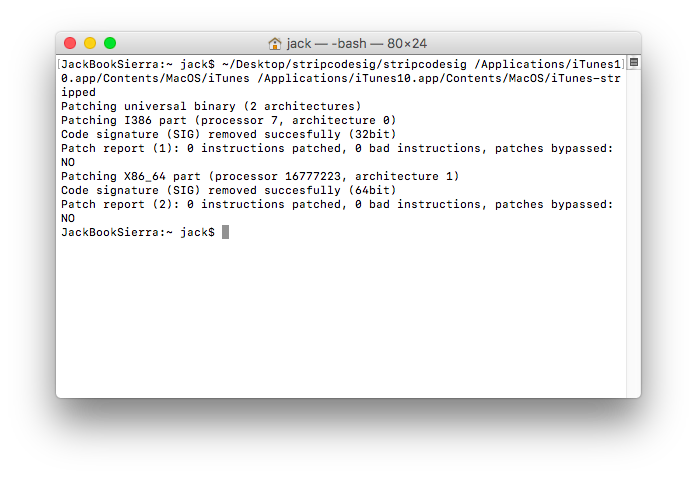 9) Replace the old iTunes executable with the stripped one:

10) Set the right permissions to the new executable and enjoy iTunes 10!


Addendum:
You Will want to disable the latest iTunes from running automatically. to do so give this command:

You might need to give it again if you ever update iTunes from the App Store. If you want to run iTunes 12 (or whatever) again just give the opposite command:


If you open iTunes while olding down the Option (alt) key youll be given an option to select a different iTunes library. This way you can still use the newer iTunes if you need to interface with an iDevice thats not supported by the older version.

And if iTunes 12 updates your library dont despair: just close the application immediately and restore the old library file from the backup thats automatically generated in the Previous iTunes Libraries folder inside you ~/Music/iTunes folder. 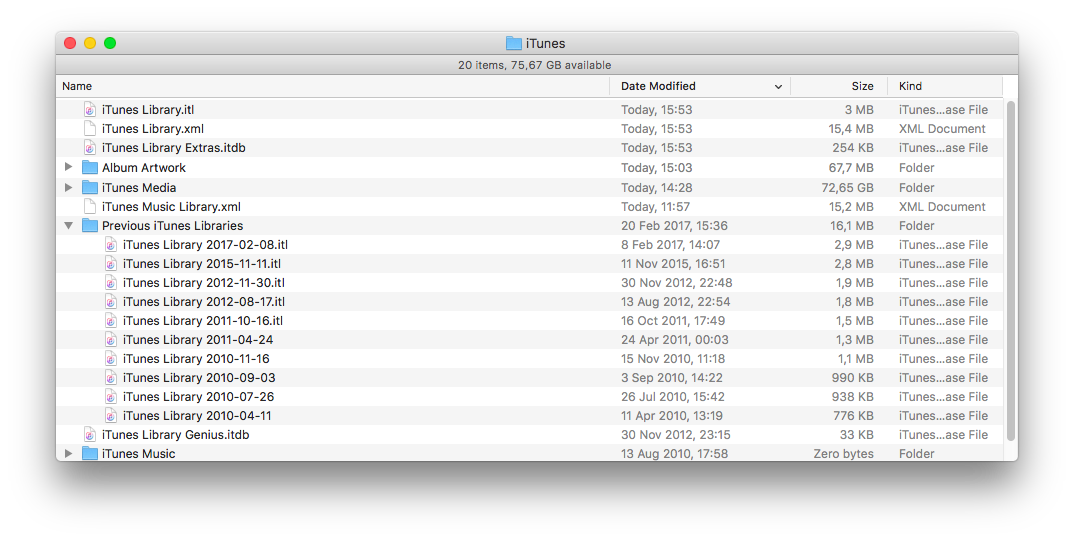